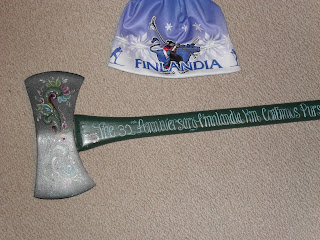 Just over 17 years ago in 1996 I decided to give up on ski racing.  In fact, I actually decided I would do one last ski race and then move on to something else.  That race was the Finlandia in Bemidji, Minnesota.

Let me back up for a bit to give you the background of how I arrived at that decision.  I started ski racing in 1992.  My real sport back then was bike racing and I skied lots in the winter for training but never wanted to actually ski race.  Randy Plett, another bike racer and also a ski racer, nagged me to try a ski race.  I finally relented and did my first ski race ... the 30 km Grand Beach Loppet ski race.  I bonked horribly in the last 10k and barely made it to the finish, but I was hooked.  I did several more races that winter and the next winter.  As my bike racing career came to an end in 1993, I still wanted to do some ski racing.

I soon found out that ski racing was a lot harder when I wasn't training 20 hours a week year-round for bike racing.  In 1996, I decided to train more than a few hours a week to do better at my now sole sport of ski racing.  Unfortunately, the winter of 1995-96 was horrendous with almost every ski race I wanted to do being canceled because of cold weather.  I did race in the Windsor Park Open that year in January, but on an open stretch with a strong wind at my back, I managed to plant my pole between my skis, face plant, and then get up to see one of my poles broken.  A few kilometres later, provincial coach Ihor Barwinsky gave me one of his poles to finish the race.  I was somewhat demoralized, but decided to contest a final sprint with a couple of skiers that had caught up to me.  A skier, who will go unnamed, skied over my ski in the final sprint and sent me down with another face plant and then proceeded over the next several months to bring up his "victory" over me whenever he could.

After a series of cancelled ski races, I finally got to do another race -- the Red River Ski Fest in mid-February of 1996, also at Windsor Park.  I signed up for the 15 km race which started along side the 30km race.  I had an absolutely miserable race seemingly being passed by everyone.  Late in my race, Kirk Karlowsky, a top skier at the time and doing the 30km race, suffered a broken pole.  By the time he got a replacement, I had caught up to him.  Right then and there I set upon doing everything possible to stay with him for the remaining 5 km of my race (he still had 20km to go and had to pace himself).  I buried myself for about the next 15 mintues staying behind Kirk.  I crossed the line and collapsed.  Only 3 years earlier in longer and hillier ski races, I had got fast enought that I could keep up with Kirk without much diificulty.  Now I could barely stay with him for 5 km's of a flat course and him using a pole that was too short for him ... and he was pacing himeslef for a much longer race!

At this point, I made my decsion.  I was done with ski racing.  It didn't seem worth it to do so poorly.

Enter Randy Plett once more.  Randy and Kirk were headed to the Finlandia race that very next week-end and Randy asked me if I wanted to join them as Kirk had room in his mini-van for one more skier.  Randy, persistent as ever, got me to go.  My thinking was that I would make the Finlandia my last ski race ever.  And I mean ever.  Like Never, Ever, Ever Again.

Little did I know a couple of things were about to change my outlook on ski racing.  First, I guess my body was quickly digesting the hard effort I had made to stay with Kirk in the Red River Ski Fest and was about to overcompensate dramatically in time for the next week-end.

The second thing that happened was Randy and Kirk pointing out that I was not scraping my skis properly.  It was going to be a cold day for the Finlandia ski race which neccesitated having your excess ski wax scraped and brushed out well.  My wax scaper had become quite dull and I hadn't realized that I was not scraping the wax off my skis enough.  Randy and Kirk went to work on my skiss taking an amazing amount of excess wax off.

The importance of these two things were not that apparent to me as we went to register at race headquarters the night before the race.  As I mulled around the race registration area, I noticed they had the race winner's "trophies" on display.  The trophies were actaully beautifully decorated axes.  Bemidji was the home of the legendary lumberjack Paul Bunyan and his Blue Ox.   I remember thinking that was a really cool trophy.

The next day I lined up at the start for the 25km race and the Finlandia.  The 50 km race started 5 minutes earlier with Randy and Kirk doing that one.  The race starts in a field near a downhill ski area.  About 500 meteres into the race, you ascend a downhill ski run.  As we crested the top of the ski run, I was in the top 5 skiers and something didn't seem to feel right.  I didn't seem to need to be trying that hard to stay with these lead skiers.  And then on the down hills, my skis would run up easily to the other skiers to the point I was sometimes having to snow-plow on downhills while other skiers were in full tuck.

About 15km into our race, I passed Kirk (who had started 5 minutes ahead as part of the 50km race).  Six days earlier I had to literally kill myself to stay with him.  Now our lead pack flew by him.  Late in the race, I was starting to feel tired, but I managed to get second in the final sprint.  Second place at the 25km race at the Finlandia.  What the ...?  A complete turnaround from a week before.

On the ride home from Bemidji, I thought, "well, I have to come back and win this race and get one of those axes".  So much for my decision to stop ski racing!

Well, little did I know (this seems to be a theme here in this story), my goal to win an axe would stretch some 17 years.  Without going into too much detail here are some of my subsequent Finlandia results:

1998 - over-trained and while managing some great races early in the season, was 8th place in the Finlandia 25 km skate race

1999 - super fit, great results leading up to the race, felt great on the Friday afternoon before the race.  The night of the race, had a horrible stomach flu and was up all night.  The next day, as I was deciding to whether to even do the race, fellow Downtown Nordic club member Paul Lapointe suggested "sometimes when you are not feeling well, you have your best races".  Let me assure you that this is terrible advice!  I finished in 63rd place in the 25 km skate race being passed in the final few metres by a 12 year old.

2000 - My best ski season ever.  The Finlandia was cancelled due to lack of snow.

2002 - racing well that season.  On the Friday afternoon, the person I was going to get a ride with to Bemidji had to cancel because of a family emergency.

2006 - peaked peferectly for the race.  I guess I ate something wrong the night before the race.  In the morning, I could not keep anything down.  I raced and stayed with the lead pack unitl about 5km and then my body completely shut down.  Dropped out at kilometer 8.

At this point, I gave up on trying to win an axe.  It seemed pointless to set such a difficult goal.

My original plan for the Finlandia this year was to do the 50km skate race as I wanted to try something different this year.  As the race approached and the temperature forecast was for colder (and slower conditions), I decided to to just do the 25 km classic race.  On Saturday as I was warming up for the race, I felt the snow conditions weren't too bad and decided to do a last minute switch to the Pursuit race (13 km of classic followed by 12km of skating).

The classic portion of my race was not too bad, but I knew I wasn't quite at the level I had been a few weeks earlier.  However, I realized that there was only one other Pursuit skier in my pack.  I entered the skate portion in the lead for the pursuit race, but it seemed it was just a matter of time before I would be caught and passed.  At that point I just focused on using smooth skating technique and repeated Coach Tim's skating mantra of "quick feet" to myself  on the uphill climbs.

With a little over a kilometre to go, it started to sink in that I might actually finish in first place in the men's pursuit race and take the axe!  At this point I realized I was skating on the exact same skis that I had finsihed second on 17 years earlier.  Yes, I was skiing on those same Fischer RCS skis.  I had found them to almost always be my fastest skis in cold snow conditions and I picked them when I made my last tminute decison to switch to the pursuit.  My skis and I were completing a 17 year journey!!


It was a great day all-around for Manitoba skiers with Murray Carter winning the axe for the 25 km classic race and Joel Peltz taking third place in a very tough field in the 25 km skate race. 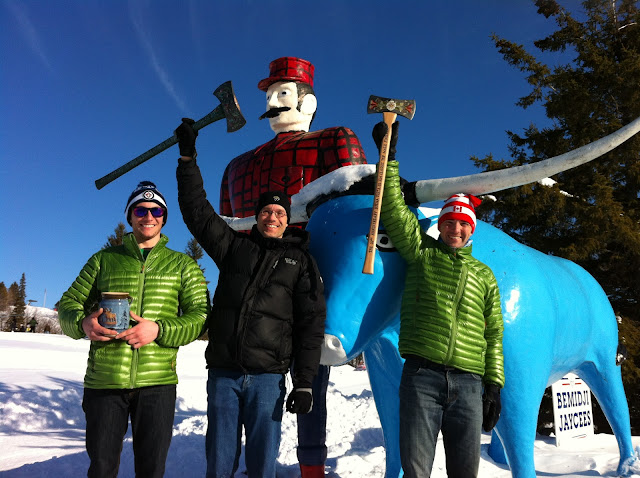 (Brad Pitt is starring with Justin Bieber playing a younger me)