As the snows of the pandemic winter melt away, the tally of 30 distinct Manitoba ski areas has been achieved.  The final official listing, as approved by the officials at Guinness Book of World Records, is as follows... 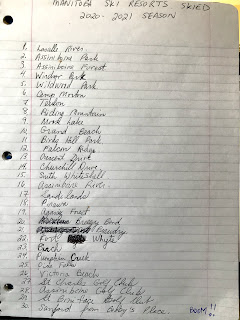 The world record was obviously not achieved without the liberal shedding of blood and tears.  A beloved, fairly new pair of skin skis were haphazardly stone ground (for free!!) during the attempt on the infamous ski trails of the St Charles Golf and Country club.  The lovely camouflaged crushed gravel, which was thus found to be protruding through the icy snow, was very effective at achieving its version of a stone grind.

Also, a late season attempt to crust-snow skate ski at the St Boniface Golf Course, resulted in a broken ski pole.  The particular session ended with a one poled "ski of shame" back to the groomed trails at Windsor Park.

I have been asked by several folks what my favorites were this season   I have had several so I will leave you with these categories:

Favorite new trail:  Teulon  It’s fairly close to the west side of Winnipeg, very well groomed for both Skate and Classic, has some very challenging hills, and is just well organized overall.  The cute little cabin will be an added bonus once the dreary pandemic ends.

Favorite ski day:   Sunday, February 21st at Birch and Pumpkin Creek .  It was a warm, sunny day.  Snow conditions were just about perfect. The trail was groomed from Birch ski area to Pumpkin Creek.   We skied for hours, through the hills, forests and fields at Birch and over to the lovely Blue Moon, The Stroll and Rogers Pass trails at Pumpkin Creek.   We only saw one other skier on the trails on a otherwise perfect Sunday Ski day   Happily, we ran into DN member and friend Ken Bell in the parking lot afterwards. He also had a fabulous day out there and we were thrilled to share our post ski endorphins together in  the sunshine.

Favorite Prize:  Despite breaking a 40 year old record and receiving the Guinness World Record, breaking out and skiing on old favorites and discovering new ski trails was the biggest reward!  This Pandemic Winter has been fraught with uncertainty, confinement and stress.  It seems that Nordic Skiing, even on the bitterly cold days was the best medicine for anxiety, sadness and isolation.  I challenge the pharmaceutical industry to find anything better for the mind than even a bad day on the trails (I know its a cliche, but is there such a thing as a bad day on the trails?).

I do hope people find a way to attempt their own versions of the "Ski More Manitoba trails" next year and set the bar even higher.  Regardless of whether one breaks the record, there is a lot of satisfaction to be gained in leaving your "regular routine" and skiing on new trails.