Well, the good news is the world has not ended.  The bad news, if you haven't heard by now, is that Coach Tim dropped a bomb on Downtown Nordic by announcing he is leaving town for the next few months.

Tim is headed to La Ronge, Saskatchewan to work as a coach for Ski Fit North which promotes and develops cross-country skiing in northern Saskatchewan.  He'll be leaving in early January.

At Thursday's practice, Tim's announcement brought many club members to tears.  Like this fellow: 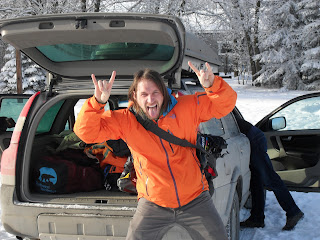 Tears aside, this is an incredible opportunity for Tim and we wish him all the best.  And as long as they have "beer and wings" in La Ronge, Tim will do just fine.

Oh, and with the world not ending, well, that means, we still have a world to dominate.  Let's get on with it!