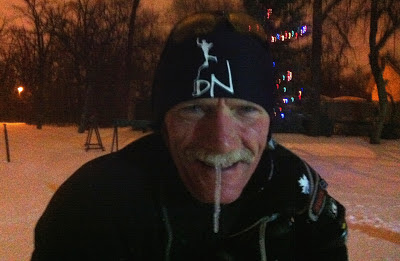 The skier is Ben VanDenBosch.  That was from last Tuesday at Windsor Park.  Just to be sure, that icicle is from Ben's moustache and not his nose.  I believe it sets a new Canadian record for a face icicle!  Do we call that a facicle?

Some background on Ben for those who don't know him.  Ben has been a long-time top triathlete and cyclist in Manitoba.  For over a decade, he held the course record at the Morden Half-Ironman triathlon.  Last year, he set his sights on the American Birkibeiner ski race.  In a chance encounter at Bird's Hill one day in late 2011, I invited him to join our fledgling ski club.  Little did I know that it would open up a whole line of cyclists and triathletes (and then rowers) joining our club.

And for setting a new facicle record, Ben is this week's Downtown Nordic Skier-of-the-Week!