Here is a fascinating video of the 1958 FIS Nordic World Ski Championships, 15km men's race which was held in Lahti, Finland. It was the first championships to use electronic timekeeping where results were timed to the tenth of a second rather than the full second.


The race was won by  Veikko Hakulinen (FIN) in a time of 48:58.3.  Pretty fast considering the heavy looking wooden skis, and the outfits!

Not to be outdone, here is a video of the 10 km women's race in the same Championships, complete with fetching outfits, and interesting commentary.

Even better, here we have some exciting footage from the 1936 Winter Olympics, men's 4 x 10 km relay.    These Olympics were held in Garmisch-Partenkirchen, Germany just a few years before the start of WW2.  Sixteen teams were entered.

The race was won by Finland in a time of  2:41:33, just 6 seconds ahead of the second place team from Norway. 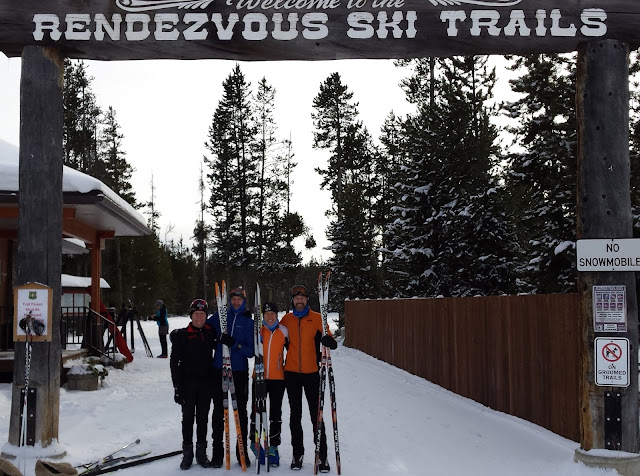 In early December, a few underemployed DN members panicked at the lack of snow in Winnipeg and fled on a last minute decision.  We drove 16 hours overnight to West Yellowstone, Montana and the promise of the groomed Rendezvous ski trails.
An annual trail pass for the Rendezvous trails is $40, or $8 per day.  Cheap accommodation was easily obtained through Airbnb.  As early December is still the off season, West Yellowstone is basically a ghost town and weeknight rates are very reasonable.  We stayed at the Wyndham time-share condos which featured indoor pool, hot tubs, exercise room and a games room. These were very useful as we tried to hold ourselves back from over skiing so early in the season.

West Yellowstone is located at an elevation of 2032 m.  This altitude left us feeling winded and tired for much of the week.  The Rendezvous trails are also rarely flat, which also contributed to us flat-landers feeling fatigued.


The ski trails were initially soft, which made for slow and difficult skiing. On the third day, we awoke to temperatures of -35 C, but we bravely ventured out nevertheless and discovered newly groomed trails that were hard packed. With the sun shining, we had the best day of skiing yet.

The last two days of skiing were near perfect.  Hard packed, freshly groomed and basically empty trails. It felt as though we had the whole town and ski trails to ourselves. 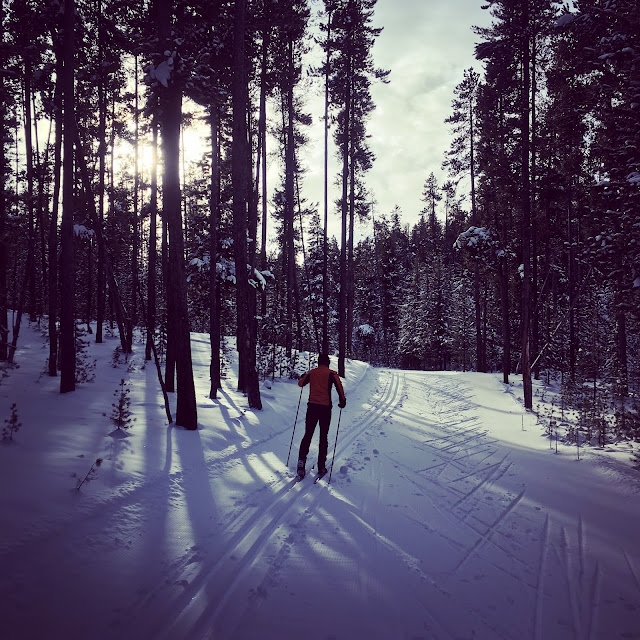 The West Yellowstone area has various other ski trails outside of town that we did not have time to expore. All of Yellowstone’s unplowed roads and trails are open to cross country skiing and snowshoeing during the winter. There is also the possibility of a long marathon ski to Old Faithful.  These possibilities will keep West Yellowstone on our radar in the winters to come.

Here is a great video -- not just for the interviews, but also there is some great video of ski technique (put the ski sections in slow-mo) -- great double-poling shots from the side and also steep-striding sections!

Hey club members, we have permission to use Windsor Park tomorrow for out first instructional session of the season.  WP offically opens on Saturday, but becuase they love us so much they are letting us in early :)

Be there by 7PM to meet the coaches and we'll be out on the trails by 7:30

"No snow" is not a valid excuse for not skiing

If you ever thought of taking a night off of DN ski practice due to poor snow conditions, the following article might help you reconsider.
https://www.theguardian.com/sport/2016/dec/06/tongas-olympic-flag-bearer-turns-hand-to-cross-country-skiing?CMP=share_btn_link
Posted by macgerg at 8:48 AM

The DN Dress Code - For your comfort and enjoyment!

Winter is coming! With colder temperatures in the forecast by the end of the week, this timely blog entry should help you prepare the appropriate gear for skiing in Winnipeg winters.

Cross-country skiing is a high intensity sport, and so you’ll build up a healthy amount of body heat and moisture when training. Some of this moisture is sweat, but most of it is condensation from the temperature difference between your body and the cold air. The faster speeds also result in significant wind-chill as well as an increased frostbite risk.

Here’s a formula to follow when dressing for DN, remembering that each layer should be breathable.

Base Layer: This layer will keep you warm by drawing moisture away from the skin. Tight fitting long underwear or tights made of polypro or merino wool are best for keeping skin dry.  I like merino because it rarely smells bad; synthetics are the worst. Cotton has been called the “death fabric” as it gets very wet and cold, so don’t wear it anywhere when you are skiing.

Mid Layer(s): These insulating layers, using materials such as synthetic, merino, or polar fleece, are designed to keep you warm and wick that moisture even further away from your skin. Try multiple layers rather than one super thick layer, so you can easily remove what you don’t need while out on the trail. You can use layers of varying thicknesses to help you regulate temperature better.

Outer Layer:  You will want a windproof soft-shell and ski pants, which have windproof panels in front and are breathable in the back. We (mostly) ski facing forward down the track, and so create the windchill on the front of our body. A great option on some jackets is zipper venting under the arms. You can test windproofing by holding the fabric to your mouth and attempting to blow through the fabric… try not to do this in a ski shop while wearing heavy lipstick.

Steve’s tip: spend a couple minutes warming up each hand before going outside, to offset the body’s reaction to the cold of drawing blood away from the extremities.

Hands: Mittens are warmer than gloves, but gloves give you better pole control, and are great in warm weather. In choosing mitts for skiing, pick a mitt that is compact and fits into your pole strap well. Invest in a pair of extra thin polar fleece overmitts for those extra cold days.

Feet: Feet can be a challenge for many. In addition to choosing warm, comfortable ski boots, the best solution is to wear a merino wool sock and hold back from layering socks to the point where you barely have room to move your toes. There must be air space around your foot to allow blood circulation, and to trap heat. If you find your feet are chronically cold, you can try fitting Instant Toe Warmers into the boot, or invest in a pair of neoprene or insulated boot covers, sold by many ski shops.  You could also buy electric socks (yes they exist!)

Head: Toque, balaclava and buff combos are great. I’m a huge fan of long merino wool buffs that can be folded in all sorts of combos. Cover exposed skin on very cold skis – it takes no time to wind up with frostbite. Check your friends’ faces, they may not be aware of what’s happening to them.

For ski clinic nights, be prepared to be standing around more than you would on a normal exercise or workout ski. Add an extra insulating layer (or two!) and protect your extremities.

On interval nights, be prepared to be skiing like a maniac, way faster than you would on a recreational or low-intensity training ski. Remove an insulation layer, but wear that soft-shell breathable jacket to protect you from windchill. You will also want a good balaclava, toque or DN buff combo that covers skin and will keep that cold air out of your lungs.

This may be an outfit to try for spring skiing ... 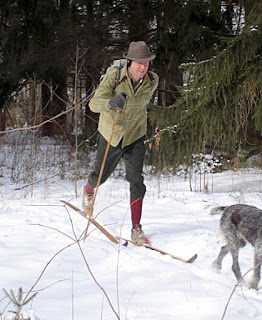